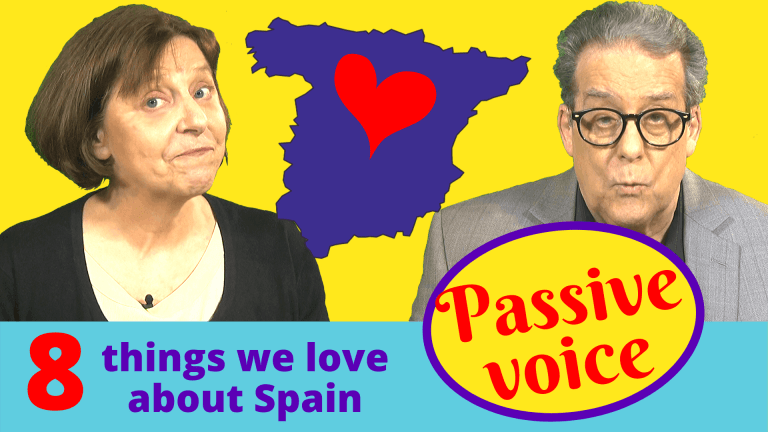 Learn 8 things we love about Spain while we quiz you about the passive voice in English.

We’ll show you how we use the passive voice in spoken English and answer questions like:
– How do we form passive structures?
– When do we use passives?
– Are passives more common in written English?
– What verbs are often used in the passive form?
– How can passives sound more elegant?
– Is ‘be’ the only verb we use in passive structures?
– What does ‘have something done’ mean?

And along the way you’ll see some of the fun things we loved about Spain like the sugar packets, the orange crushers and the wonderful child friendly culture.

To see our video on ‘have something done, click here.

The passive voice in English

Here are 8 things we love about Spain.
Can you guess what they are?
We’ll tell you all about them in this video.
And we’re also going to quiz you about the passive voice in English.
Most English sentences are organized like this one. They start with the person or thing that does the action.
So ‘we’ is the subject and it comes first. Sentences like this are active voice.
But it’s not the only way to organize sentences. Sometimes the thing that receives the action can be the subject. And then we use the passive voice.
Here’s your first task. We’re going to tell you about our trip to Spain and you have to spot the passive form.
Ready?

The first thing we love about Spain is the breakfasts.
The weather is lovely so we often go out and have a tostada.
That’s a piece of toast with jam.
Or ham and cheese, or tuna. Whatever you want.
And the coffee’s good too. And the sugar!
Some of the packets are printed with famous sayings and quotations.
We liked trying to work out what they meant in English and practicing our Spanish.

Did you spot this sentence? The verb is passive.
The active version would look like this.
But we’re not interested in who printed the packets, so the passive voice is very natural here.
That’s the important thing about passives. We use them when we don’t know who does something, or if they’re not important.
The focus is on the action.
Yeah, the action – not who did it.
But we can say who did it if we want. Let’s see an example.

Another thing we love about Spain is Almeria. That’s the city we visited last fall.
It’s on the southeast coast and it has a port, a beach and a castle.
The castle was built in the 10th century by the Moors.
The city has a beautiful old town with lots of historic buildings, but there aren’t many tourists.
Most people work in agriculture and farming. A lot of Europe’s fruit and vegetables are grown here.

We had a special reason for going to Almeria though. My grandson is there.
In fact he was born there.
You’ll see him later. But first some grammar.
With passives, if we need to say who did an action, we use the word ‘by’.
So this castle was built by the Moors.
A question. Do most passive sentences contain the word ‘by’? No. Only about 20% do. That’s because the focus is on what happened – not who did it.
Two more examples.
Notice the form. We use the verb ‘be’ and the past participle of the main verb.
These two sentences are present tense.
To switch to a different tense, we change the tense of the verb ‘be’.
Forming passives is normally straightforward.
Knowing when to use them can be tricky though.
But you know some already. For example, which sentence is correct here? It’s this one.
‘Was born’ is the passive form of the verb ‘bear’.
The active would be ‘His mother bore him’, which sounds really weird.
And there are other verbs that you hear a lot in the passive form.
See if you can spot one.

Here’s something I didn’t expect to find in Spain. There are a lot of Chinese convenience stores.
They sell all kinds of things and they seem to be open all hours of the day.
Most of the things they sell are made in China and they’re really cheap.
There were some things we’d forgotten to pack.
Like the plug adaptors for our toothbrushes.
We found them here.

Did you spot the passive form? It was the verb ‘make’.
You’ll often hear it in questions too.
And I have another verb.
Let’s see it.

There’s a Spanish vegetable soup that we love.
It’s called Gazpacho and it’s served cold.
Very cold.
But you can buy it America.
Yeah, but in the US they add sugar.
It’s much nicer in Spain.

‘Call’ is another verb you’ll often hear in the passive form.
If you don’t know the name of something you can say ‘What’s this called?’ It’s a useful question when you’re learning English.
Some very common phrases contain passives.
And sometimes the passive voice just sounds better.
What do you mean?
Let’s see some examples.

Another thing I love about Spain is the tapas.
Tapas are small plates – small dishes of food.
They’re served in bars so when you order a drink, it comes with one or two dishes.
Tapas are sold all over Spain but in Almeria they’re special because there are big menus to choose from.
What about those menus though? Could you find things you liked?
Ummm, sometimes, but they had a lot of meat and fish and that was difficult for me because I’m vegan.
Luckily I’m NOT vegan so I loved the tapas!
I thought the wine was wonderful, though.
Ah! That’s the next one!
We both love red wine and one of our favourite grapes is tempranillo.
It’s used to make Ribera and Rioja wines.
Our local market had big barrels of it.
And even better, we could try it first to see if we liked it.

Tapas is the subject of the first sentence here, and the second.
If we made the second sentence active, we’d have to change the subject and that would sound awkward.
Another example. We start with a passive verb here and continue with an active one. Sometimes mixing active and passive verbs let’s us keep the same subject, so it sounds better.
One more example. First we have the active voice, then the passive.
It wouldn’t sound so good if we just used the active voice.
With a passive verb, we can carry on talking about tempranillo.
So sometimes the passive voice sounds more elegant.
It can sound more formal though.
It’s more common in written English and you’ll often find it in technical writing and legal documents.
OK, I have another question. We form passives with the verb ‘be’, but are there any other verbs we use? Yes!
See if you can spot one.

My favourite thing about Spain is the child-friendly culture. It’s a lovely place to bring up children. Whenever we went out with my grandson, we were stopped by strangers in the street.
They all wanted to talk to him and tell us how wonderful he was.
And when we went into shops, he got given little gifts, like stickers or sweets.
He was given lots of candy.
And the funny thing is, he’s only one so he doesn’t actually know what sweets are. His Mum and Dad don’t let him eat sugar.
So what happens to the candy. Do they it throw it away?
Oh no! I think it all gets eaten. His dad likes sweets.

Did you spot the verb ‘get’? ‘Be’ is the standard verb we use, but in spoken English, we often use ‘get’ instead. These sentences mean the same thing, but the first one is more likely to be spoken.
You heard another example. Notice that we need a passive here because we don’t actually know who eats the candy. We have our suspicions though. We’re watching you Tom!
OK, I have another question. Are ‘be’ and ‘get’ the only verbs we use in passive structures?
No, they aren’t.
There’s another verb with passive characteristics.

Jay found a new toy to play with in Spain.
Yeah! A lot of Spanish supermarkets have machines like this.
The oranges get crushed by the machine and the juice comes out at the bottom.
So you don’t have to squeeze your oranges yourself. You can have them squeezed for you. It’s so cool.

We heard another example of the verb get. We often use passive forms to describe technical processes like this.
But what about this example. We could have bought the oranges, taken them home and squeezed them ourselves, but we didn’t. We had them squeezed for us.
The verb ‘have’ has a special meaning here. We use it to talk about a service that’s performed, and again it emphasizes the process and not who does it.
We’ve made another video about ‘have something done’.
I’ll put the link here and you can check it out.
Why not watch it next?
Yes, because it’s time for us to say good-bye.
If you’ve enjoyed this video, please share it with a friend.
And make sure you subscribe to our channel so you don’t miss our future videos.
Bye-bye.
Bye.

This site uses Akismet to reduce spam. Learn how your comment data is processed.