Learn some common words and phrases we use to talk about lies and lying in English. We look at some things we say when we think other people are lying like:

We explore lies we tell other people like fibs and white lies, and also things we say when we kid ourselves.
And we also look at some idioms like:

Hey Jay, you’re late. Where are you?
I’m… I’m on my way.
Well, how soon will be you be here?
20 minutes?
You’ve got to be joking.
I’m waiting for an Uber.
An Uber?
Yeah, the first Uber driver got stuck in traffic and the second one got lost, so I called another …
You fell asleep, didn’t you!

I was lying through my teeth there. That means saying things that were not true at all.

You were telling me a pack of lies. That’s a group or series of lies that were all untrue.

And that’s what this videos about. Words and phrases about lying.

Before we start, notice we use the verb ‘tell’ with lies. We don’t ‘say’ them, we ‘tell’ them.

And if we think someone’s lying we might say: ‘You’ve got to be joking’.

Basically it means I don’t believe you.

And a similar one. ‘You’ve got to be kidding’.

To kid means to tell someone something that’s not true, and we often kid people as a joke

But we can also kid ourselves. That’s when we tell ourselves something that isn’t true because we really want to believe it’s true.

I really need to buy another pair of shoes.
I’ll just watch one more episode and then I’ll go to bed.
If I pay by credit card, it’s not real money
If I open this bag of chips, I’ll just have one.

So that was us kidding ourselves.

We’re both on a diet at the moment so we’re trying to write down all the calories we eat.

But sometimes we cheat a little.

I can have two ounces of these. Ah. Too many. Perfect! There you go!
Jay!
What?

OK and I can have 5 ounces of this.
Is that five ounces?
Well, sort of.

When you stretch or bend the truth then what you say is not completely accurate.

Well this is good Jay. It’s 180 calories per serving.
That’s great. But how big is a serving?
Two ounces of fifty six grams. Let’s see.
Huh! That’s not enough for a meal.

So packages can be misleading.

Misleading means they give you the wrong idea and make you believe something that isn’t true.

OK, let’s have a couple of idioms now.

Hi. Ooo, what are you eating?
Nothing.
Come on. Come clean.
OK. Chocolate cake. You caught me red-handed.

If you come clean, you tell the truth

And if you catch someone red-handed, then you catch them in the act of doing something wrong. 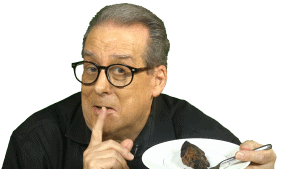 A fib is a small unimportant lie.

We often use fib to describe the lies little children tell. Fib can be a noun and a verb

And we can also say a fibber. That’s a person who tells fibs.

A fib is similar to a white lie. That’s an unimportant lie too.

That wasn’t a good white lie.

Yeah, the thing about white lies is they are told out of kindness.

They’re lies that make the other person feel good.

So white lies should benefit the person they’re told to rather than the person who’s telling the lie.

For example, it’s telling your dad that the meal he cooked tastes good, even when it doesn’t.

Or telling your grandma you love the sweater she knitted for you, even though you don’t.

Perhaps you have some more examples. Tell us in the comments.

Or tell us a white lie! Something to make us feel good!

OK and that’s it. If you’ve enjoyed this video, please share it with a friend.

And check out our new and updated website where you can find all our videos with transcripts.

Click here to see more of our vocabulary videos